The European Week of the Jewish Culture 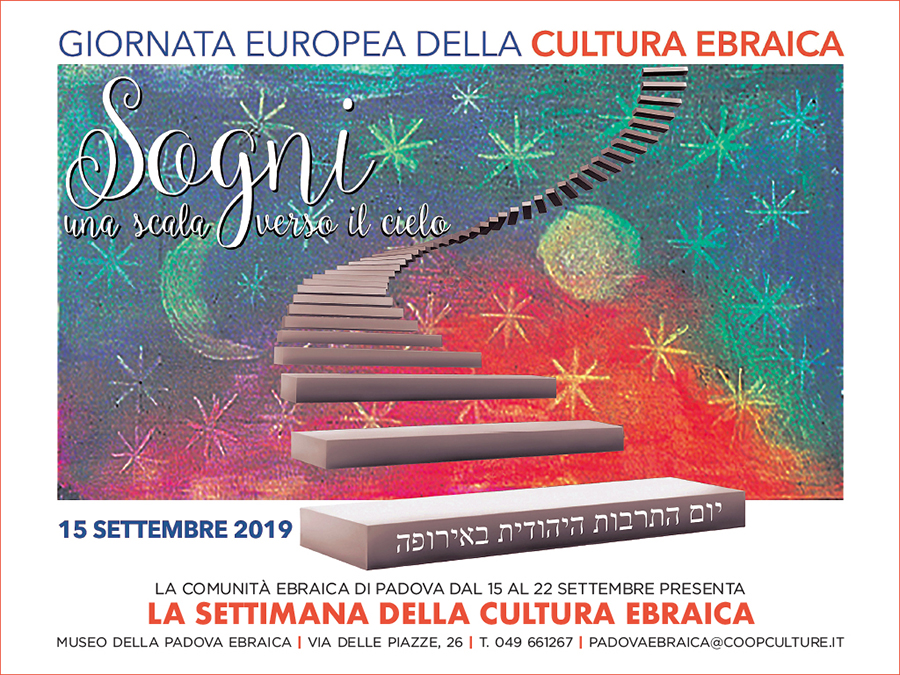 Dreams. A stairway to Heavens

On the 20th European Day of Jewish Culture, the Jewish Community of Padua presents a week of events on the theme Dreams: a stairway to heavens. Meetings, films, theatre readings and guided tours focus on the profound meaning of the oneiric world.

Starting from the Jewish tradition, man has given dreams several functions and meanings regarding the individual’s and mankind’s destinies: his existence, his contact with the divine and the transcendent, his relation to time and the future. Through his oneiric vision, man has created relations with time, ancestors and the future.

As all the events will be in Italian, those who wish to have a guided tour to Museum and Synagogue in English, should contact the Museum.

The week will start on Sunday 15th September with the screening of the film Fiddler on the Roof by Norman Jewinson, Usa 1971. Set in a fictitious Jewish shtetl in 1905, the film is taken from the novel Tevye the dairyman by Sholem Alecheim.  Tevye tries to keep his family within the Jewish religious traditions while external influences threaten his life. Three out of five of his daughters choose husbands who gradually turn away from their ancestors’ religion, and, what’s more, an edict by the Czar banishes the Jews from the area.

The title of the film refers to a recurring subject in Marc Chagall’s paintings: the violinist playing on the roofs of a village. He represents the precariousness of Jewish life and overall, of human experience” forced to improvise a simple melody without breaking its neck”. Film Director Denis Brotto introduces the film.

On Thursday 19th September Miriam Camerini will tell about the Bund, the first Jewish socialist party.

The performance alternates Miriam Camerini readings from original texts and Angelo Basselli (clarinet) and Gianluca Casadei (piano accordeon)’s musical pieces. The narrative starts with the birth of the Bund in Vilnius in 1897 to end up with the tragic upraising of the ghettos of Vilnius and Warsaw. The performance highlights that the ideals of justice and brotherhood, which the great socialist ideologies made their own, are the very foundations of Judaism: in their millenarian tradition, the Jews have always aimed at creating a better world while waiting for the Messiah.

Sunday 22nd September will be a day full of events and free visits.